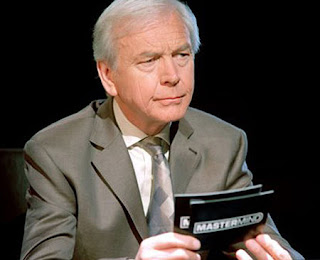 Mastermind BBC 1, 29th September 2010
Simon Martin, Occupation: Regional Manager
Specialist Subject: Progressive Rock from 1968 to 1978
1. Which band formed in 1972, by Phil Miller among others, was named after a motorway road sign?
2. Who was the co-founder, main songwriter and lead vocalist of Van der Graaf Generator?
3. Which keyboard instrument pioneered by Henry Chamberlain and deriving its sound from prerecorded tapes of various instruments was used by many prog rock musicians?
4. Which Welsh band lead by Micky Jones and Deke Leonard had four top 40 albums in the '70's including Back Into the Future?
5. What is the real first name of the Barclay James Harvest keyboard player Woolly Wolstenholme?
6. In 1972 which Jethro Tull album reached the top of the American charts and number 5 in the ?
7. What is the name of the central character on the Genesis concept album The Lamb Lies Down on Broadway?
8. Which band was formed in 1972 when Peter Bardens teamed up with three members of Phillip Goodhand-Tate’s backing band?
9. Who replaced Darryl Way in Curved Air in 1973 before leaving the band the same year to join Roxy Music?
10. Which band was formed at in 1968 by Fred Frith and Tim Hodgkinson?
11. What was the title of the first Emerson, and Palmer album to be released on the band’s own label Manticore?
12. Which subsidiary label of Decca named after a sound system released music by Caravan, Camel, Moody Blues, Egg, and others?
13. What is the surname of the brothers Derek, Ray and Phil who formed Gentle Giant after their previous group Simon Dupee and the Big Sound folded?
14. The two main founders of Atomic Rooster, Vincent Crane and Carl Palmer, had previously been members of which band?
15. In which venue was Rick Wakeman’s album The Myths and Legends of King Arthur premiered on ice in 1975?
16. Who was King Crimson's lyricist until 1972, his work with Robert Fripp included In the Court of the Crimson King?
ANSWERS 1. Hatfield & the North 2. Peter Hammill 3. Mellotron 4. Man 5. Stewart 6. Thick as a Brick 7. Rael 8. Camel 9. Eddie Jobson 10. Henry Cow 11. Brain Salad Surgery 12. Deram 13. Shulman 14. The Crazy World of Arthur Brown 15. Empire Pool Wembley 16. Pete Sinfield
Originally posted on Monday 14th March 2011
Posted by Fair View at 13:33

Email ThisBlogThis!Share to TwitterShare to FacebookShare to Pinterest
Labels: Progressive Rock Lists, Rock On the Box